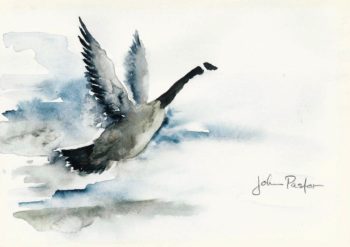 Old Mother Goose,
When she wanted to wander,
Would ride through the air
[With] a very fine gander.

The honking of Canada Geese and the wailing of Loons are the sounds of the spring returning to the North. A wedge of geese – some days two or four birds, some days many more – often passes over our house on most March and April mornings. I hear them first and swivel my head towards their voices and there they are, flying inland from Lake Superior, their long black necks straining to pull their bodies upward and northward. The geese are on their annual pilgrimage to their breeding grounds.

According to David Sibley, Canada Geese consists of at least six subspecies, differing mainly by size. The Geese flying over our house belong to one of three subspecies which migrate across the interior of the continent: Richardson’s (on average 5 lbs), the Lesser (6 lbs), and the largest of all, the Common (an average of 10 lbs., enough for a Thanksgiving dinner). Richardson’s and the Lesser Canada Geese each have two separate wintering populations bracketing Texas, but as they migrate northward they merge in the Northern Plains and Boreal Forest and continue on to their nesting grounds in the Arctic. As they approach the Arctic Ocean, they segregate again. The Richardson’s Goose nests in a thin band along the Canadian Arctic Coast while the Lesser Canada Goose nests inland from them and extends its breeding range westward into interior Alaska. The Common Canada Goose is the only subspecies that winters from the Pacific across to the Atlantic Coasts. Its summer breeding range overlaps all five smaller subspecies and also includes the rest of Canada south of the Arctic as well as the northern tier of the United States.

This triplet of subspecies is mirrored by another triplet that makes their homes and flyways along the West Coast.  These additional three subspecies are somewhat smaller than the three subspecies in the interior of the continent. Of these, the Cackling Canada Goose is the smallest (on average 3.5 lbs) while the Aleutian is substantially larger (5 lbs), and the Dusky weighs in at an average of at 7.7 lbs. The Cacklings and Aleutians winter in California while the Duskies winter farther north in the Pacific Northwest. Of the three, the large Dusky makes the shortest migration, a quick hop across the Gulf of Alaska, and nests where the glaciers of the northern Kenai Range and the Alaska Coast Range dump their meltwaters into Prince William Sound. The smaller Aleutians and Cacklings leapfrog over both summer and winter ranges of the Duskies and nest along the Aleutian Chain and on the coast of Southwestern Alaska, respectively.

Although the average sizes of these subspecies differ, there is some overlap in the ranges of their sizes. A petite Dusky may be smaller than a hefty Aleutian goose and a large Richardson’s may be heavier than a smaller Lesser Canada Goose.

Why such a variety of Canada Geese? Something is deterring the subspecies from widespread interbreeding. The answer lies with Mother Goose, specifically who she chooses to be Father Gander and where she chooses to have and raise her brood. Female geese pair with the male ganders on the wintering grounds, which, as we have noted, are in somewhat different locations for most of the subspecies. Once paired, goose and gander almost always mate for life (from now on, I will capitalize Goose and Geese when I refer to the species or subspecies and use lower case goose or geese when referring to females). Geese and ganders also mate “assortatively” – that is a large goose chooses a large gander and a small goose chooses a small gander. Whether a gander is large or small depends in part, as we saw, on which subspecies he belongs to, so by choosing a male near her size, the female will tend to choose mates from her own subspecies and thereby minimize gene flow between subspecies.

In addition, the female goose returns, year after year, to the location where she was born.  The high breeding site fidelity of the goose keeps her genes from being mixed into other populations. The male she mates with usually was not born where the female was. He thereby brings genes from other populations to be mixed into their offspring. But, once paired with the female for life, he no longer sows his wild oats across the continent from one year to the next. In contrast, a mallard drake, like that of most ducks, mates with a new hen every year and follows the hen to her breeding grounds, dispersing his genes into a different population year after year. Mallards, like almost every other duck, therefore look the same no matter where you find them and even David Sibley, taxonomic splitter extraordinaire, does not recognize any subspecies within the 39 species of ducks of North America.

If a goose’s propensities for choosing males of her own size and for returning to her birth grounds are what segregate the subspecies of Canada Geese from one another, then we should expect that the different subspecies will have their own characteristic mitochondrial DNA. This is, in fact, the case. Carol Van Wagner and Allan Baker have determined that the sequences of bases in mitochondrial DNA differ by as much as 2.5% from one subspecies of Canada Geese to another. It takes slightly more than 1 million years for enough mutations to accumulate in separate populations to make their mitochondrial DNA differ by this much. This gives a rough approximation of the rate of evolution of Canada Geese.

Unlike the mitochondrial DNA, the DNA in the nucleus of the cells comes from both goose and gander when their egg and sperm fuse.  While the goose provides both her mitochondrial and nuclear DNA every spring back to her young, the male gander she pairs with on the wintering grounds can come from anywhere across the continent. Since a female chooses a mate of similar size and since the sizes of the different subspecies overlap somewhat, a goose might occasionally choose a male of similar size from another subspecies wintering in the same location.  The nuclear DNA of different subspecies might occasionally be mixed in the offspring of the goose and her gander. The nuclear DNA (but not the mitochondrial DNA) is thereby homogenized by the dispersal of male ganders across populations and subspecies. Van Wagner and Baker found that nuclear DNA of Canada Geese differs hardly at all from population to population and even from subspecies to subspecies, unlike the divergence of mitochondrial DNA propagated solely through maternal lines.

In all species, there is an underlying tension between the reproductive segregation and the reproductive mixing of gene pools from different populations. The goose’s choice of a mate for life and her fidelity to the site of her birth segregates the gene pools of populations and subspecies. But if the gander’s genes come from elsewhere, then the nuclear gene pools are homogenized to some degree. The balance of this tension determines whether two or more subspecies will or will not eventually evolve into separate species. Perhaps we are now seeing the Canada Goose beginning to split into what may become different species sometime in the future. This tension is at the origin of the diversity not only of Canada Geese but all of life.

Molecular biology research is confirming the evolutionary histories of many species, histories which had been previously inferred by naturalists. The Avian Phylogenomics Consortium is now planning to describe the genomic sequences of 10,500 bird species, which is most of the birds of the world. One hopes that this will include mitochondrial sequences for species with mating systems like the Canada Goose. But we still need the “big picture” context that natural history provides. Xin Lu points out that we do not know the clutch size for 50% of those 10,500 bird species whose genomic sequences we will soon learn. With new technologies, genomic sequences can be developed rapidly and relatively cheaply but doing natural history still requires time and expeditions to find and observe  species throughout their life cycles.

Nonetheless, the growing collaboration between molecular biologists and naturalists is encouraging. James Watson once famously said to E.O. Wilson that natural history is “mere stamp collecting” not worth pursuing in an age when everyone is (or was) “going molecular.” One hundred and fifty years after Darwin, both fields are at last giving us a handle on the origin of subspecies and species.

But I would wager that all this is not on the minds of the geese wedging their way north from Lake Superior as the buds swell on the maples and the juneberries below. What is probably on their minds as they rise to meet the blue sky and wheel towards their northern homes is not cell and molecular biology, but something more akin to love.