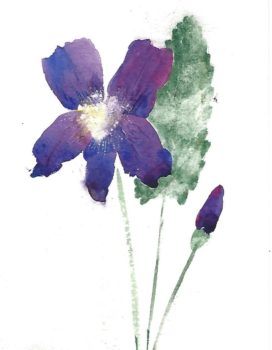 Every spring, when the apples are flowering and the warblers are nesting, several thousand New England violets (Viola novae–angliae) bloom in northern Minnesota.  New England violet is strikingly beautiful, one of the so–called stemless blue violets, the largest subgroup of over 70 species of violets in eastern North America.  In the stemless violets, the leaves emerge directly from the roots rather than along the same distinct aerial stems that support the flowers. New England violet is distinguished by its finely–toothed, elongated and elegant leaves, almost shaped like an arrowhead but with two rounded lobes at its base (an important characteristic, as we shall see).  It has rather large blue-violet flowers which are sometimes bearded: that is, they may have a tuft of hairs on the inside of the three lower petals.  The lower petal also has violet or sometimes yellow streaks which guide visiting insect pollinators to the nectar. Its habitat is generally restricted to rather dry soils with conifer overstories in the North Woods, such as on rocky cliffs. It also in canopy openings adjacent to springs and seepages and along rocky lakeshores, streambanks, and beaver ponds. The proximity to bodies of water is not because New England violet is intolerant of drought but because of the enhanced sunlight at the water’s edge.

New England violet was first described by Homer House in 1904 from a small population on a sandy lakeshore in Aroostook County in far northern Maine, hence its name. Despite the location of its discovery, New England violet is most common in northern Minnesota.  While it has also been found in a few counties in northern Wisconsin and in the Upper Peninsula of Michigan, it is rarely found eastward from there until northern Maine. Biologists refer to such divided range distributions as disjunct. New England violet is peculiar in that it is the only violet to have a disjunct range in eastern North America, all of the other violets having continuous ranges extending to the south of New England violet.

Biologists try to study the processes by which life unfolds, but unfortunately it is rare that we actually see these processes happening.  Instead, we must often infer processes from patterns.  The geographic pattern of a species range is often a clue to the process by which it evolved, one which occupied Charles Darwin aboard the H.M.S. Beagle and led to his theory of natural selection and evolution.  Disjunct ranges are very puzzling, and one of the oldest and most important problems in plant biogeography. How does a species occur in divided distributions, their two or more centers of abundance separated by half a continent?  Disjunct populations, by their isolation, are free to evolve in different directions simply because they no longer exchange genetic material with each other. Different mutations are preserved in each population if they prove advantageous to survival in that locale. They can then spread throughout each population without being diluted by a large gene pool as would happen in an undivided population.  Darwin’s genius was in using the importance of isolated populations within a species’ range to argue for the origin by natural selection of separate but closely related species.

In his monograph of the violets of Minnesota, Norman Russell of Grinnell College claims that it can be difficult to distinguish New England violet from known hybrids of woolly blue and arrow-leaved violets. This difficulty has led some taxonomists to claim that New England violet is merely a subspecies of either woolly blue or arrow-leaved violet, but Ballard and Gawlor and most of the taxonomists who specialize in violets think it is a separate, or “good”, species.

But if it is a hybrid, then why does New England violet have a disjunct range while woolly blue and arrow-leaved violets have continuous ranges from northern Minnesota to northern Maine around the south shores of the Great Lakes? Ranges are split into disjunct populations by barriers or by large disturbances occurring on subcontinental scales.  In eastern North America, the greatest disturbance was the advance of the ice sheets over 1 million years ago into the Lower Great Lakes region where New England violet is absent.  The northern edge of the ranges of woolly blue and arrow-leaved violets may have followed the conifer forests northward with the retreat of the glaciers 10,000 years ago. The preferred habitat of all three species for open shores in conifer forests is exactly what would have been present at the retreating edge of the melting ice sheets.

As the ice sheet retreated north of the Great Lakes Basin, the northern conifers (which form the major habitat of New England violets) split into two large centers around Lake Superior and in northern Maine. Today, northern conifers are not found south of the Great Lakes. Both woolly blue and arrow-leaved violets followed the conifers northward as the climate warmed. The northern edge of the range of arrow-leaved violet ended in two prongs, one around the southern and western shores of Lake Superior and one in Maine, and appeared to stop there, being very uncommon elsewhere in between. So the only places where the largest populations of woolly blue and arrow-leaved violets as well as the northern conifer habitat of New England violet are all found together are around Lake Superior (especially in northern Minnesota) and northern Maine. These places constitute exactly the present day range of New England Violet. New England violet may have developed from a hybrid precursor of wooly blue and arrow-leaved violets in these two pockets of conifer forest around Lake Superior and in northern Maine while the glacier was just to the north in Ontario and Quebec, respectively. The two populations may have spread westward from their strongholds in Maine into northern New York via Vermont and New Hampshire and eastward from Minnesota into Wisconsin and Upper Michigan, but they have apparently never met in the middle.

We also don’t know whether the Maine and Lake Superior populations are evolving into separate species themselves. Obviously, the two populations are genetically isolated, as there is no pollinator or seed disperser who routinely makes the long trek between Maine and Lake Superior. Genetic isolation is a prerequisite for division of one species into two, a process known as speciation. Another prerequisite is different selection pressures for or against some adaptations in the two populations. Differential selection pressures in the two regions could result in adaptations to different habitats. This may be happening. The Minnesota population is found only on acid soils overlying granite, but that may be because granite is the dominant bedrock in northern Minnesota. On the other hand, the Maine population is found only on alkaline soils derived from limestone even though there is also plenty of granite in Maine (and adjacent New Hampshire – the Granite State). With modern molecular genetic methods, we may be able to detect if there has been genetic differentiation between the two populations related to different tolerances of soil pH, but this research has yet to be done (here’s a good thesis project for a graduate student willing to spend summers in northern Minnesota and Maine, which isn’t a bad way to spend summers while the rest of the country swelters).

Given the variation among individual plants, biologists need to observe large numbers of individuals from many locations for data on the average tendencies of species as well as the patterns of variation along environmental gradients. But with only 139 documented locations, New England violet is listed as a species of Special Concern. Special Concern is the lowest rung on the classification leading through Threatened to Endangered so New England violet is not in danger of extinction, but you can see it on the horizon from here. Ballard and Gawler found that the majority of locations of New England violet in the east are on private land. Even with the Special Concern status, these populations have almost no guarantee of protection, especially because they could be mistakenly identified as the much more common woolly blue violet. In Minnesota, where it is most abundant, the majority of locations are on public land. But much of this public land is county, state, and federal forest where timber management is an important source of local revenue. Ballard and Gawler note that New England violet is typically absent where timber management has replaced natural forests with red pine plantations, although the plants remain abundant in the adjacent uncut forests.

The remaining public land in northern Minnesota consists of the Boundary Waters Canoe Area Wilderness and adjacent Voyageurs National Park along the Canadian border. Even here, there is no guarantee that populations of New England violet will remain undisturbed, although its chances are better. In 1993, Voyageurs National Park decided to widen and straighten the Ash River Trail to Lake Kabetogama to accommodate the increased number of “visitor-use days” along this road (this is a road I know well, having travelled its older winding and gravelly track many times to get to my research sites on beaver ponds). Ballard himself did a survey of plant and insect species along the proposed new road route and found over 2000 individual New England violet plants in the right of way, certainly one of the largest if not the largest population of these beautiful plants anywhere. The road was then redesigned to avoid these plants as much as possible, but if New England violet was not already listed as a species of Special Concern, this may not have happened, even in a National Park. Populations in the roadless wilderness of the Boundary Waters Canoe Area are perhaps more protected, but even there small populations in back country campsites and canoe portages could be inadvertently exterminated by campers or trail maintenance crews.

New England violets and many other species are ecological and genetic treasures. They each have something to teach us about how nature works, if only we stop and listen to what they have to say. Research is a way of listening to what nature has to teach us. But in order for us to learn from these species, their populations have to be viable and protected. As has been said many times, extinction is forever; once a species is extinct we lose forever much of the knowledge it has to offer. Such large and protected populations as occur in National Parks and wilderness areas are data banks in reserve, waiting for some inspired student to ask the proper question.  The Endangered Species Act protects not only rare plant and animal species, but also our ability to learn about nature.

Baird, V. B. 1942. Wild Violets of North America. University of California Press, Berkeley, California. (a revision and expansion of Brainerd 1921 – see below).

Darwin, C.  1859.  The Origin of Species.  John Murray, London, and many other subsequent editions. I especially recommend the version annotated by James Costa and published in 2009 by Belknap Press of Harvard University Press.