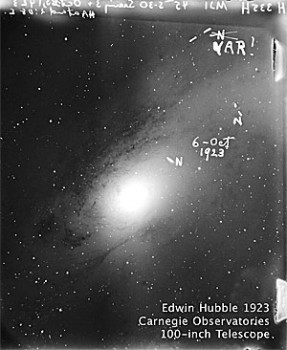 One summer some years ago, while doing fieldwork in northern Minnesota, I was reading a book by the astronomer Joseph Silk called Cosmic Enigmas, a collection of essays about the formation of galaxies and other questions about the Universe. In northern Minnesota, especially along the shores of lakes in the Boundary Waters Wilderness, there are many outcrops of Precambrian granite, greenstone, or gneiss. These are 2.7 billion years old or older. In the evenings, you or I could sit on them and watch the stars, the Milky Way, and the Universe appear as the sun slides below the horizon and darkness descends. One night in late August that summer, I sat on such a granite outcrop to see the Milky Way and put the theories in Joseph Silk’s book in perspective. It seemed somehow appropriate to view the Universe while sitting on some of the oldest rock on earth.

Because there was a new moon that night and the sky was very dark, I was able to make out not only the Milky Way, which is the edge of our galaxy, but also the Andromeda Galaxy 2.2 million light years away. In the Northern Hemisphere, Andromeda is the only other galaxy that can be seen with the naked eye. Andromeda is near Cassiopeia, the constellation that looks like a big W or M. The more deeply incised V of Cassiopeia points directly at Andromeda. Without a telescope, Andromeda is a faint smudge but, in one of those puzzling tricks of our vision at night, it is best seen if you look at it out of the corner of your eye.

The Discovery of the Lumpiness of the Universe

In 1609 and 1610, Galileo discovered that the Milky Way is not so milky but instead is a scatter of thousands of stars. This was the first major discovery of the structure of the large-scale Universe. Galileo discovered this using a telescope he made which was not even as good as a modern birder’s spotting scope. But his telescope was not powerful enough to do the same for Andromeda.

The next 13 generations of astronomers between Galileo and my grandparents’ generation thought that the Milky Way was an “Island Universe”, a big and isolated lump of matter composed of hundreds of thousands of little lumps – the stars, planets, asteroids, and comets – lying and perhaps rotating slowly and serenely in a dark, infinite sea of empty space. The Milky Way was thought to be the entire Universe. These 13 generations of astronomers thought that Andromeda was just a cloud of glowing gas in our own galaxy, and the usual name for these clouds at that time was “nebula”. But no one really knew what or where nebulae where.

Then, in 1923, shortly before my parents were born, Edwin Hubble, using the new 100 inch Hooker telescope at Mt. Wilson, California discovered a variable star in Andromeda (the star labeled Var! in Hubble’s photo at the beginning of this essay; use of photo courtesy of The Carnegie Observatories). He then used Leavitt’s and Hertzsprung’s calibrations to show that its distance, and hence Andromeda’s, was much too far away to be in our own galaxy. With Hubble’s discovery, the large-scale structure of the Universe became more than just the Milky Way. A race to make larger telescopes and discover more galaxies was on.

In the most recent decades, we have learned that galaxies are aggregated into clusters and even bigger superclusters arrayed in great walls and sheets and filaments. The Milky Way is in the gigantic Pices-Cetus Filament which is 1 billion light years long and contains over 1 million galaxies arranged in at least 50 galactic clusters. This, our home galactic supercluster, is the sixth or seventh largest structure in the entire known Universe. These galaxies, filaments, walls, and sheets are smeared out on the surfaces of giant bubbles of space almost empty of luminous matter. The diameters of these bubbles are a thousand times the diameters of the galaxies on their surfaces. The largest bubble is the Great Void, 1.3 billion light years across. Since Hubble’s research in the 1920s, we have learned that the Universe is a lumpy foam of a god-awful number of galaxies lying on the surfaces of enormous bubbles of nearly empty space.

Hubble’s other great discovery was that the galaxies are rushing away from each other and that the farther they are from us the older they are since it takes light longer to reach us. Therefore, looking farther out in space is the same as looking farther back in time. The fact that the galaxies are rushing apart leads to the inevitable conclusion that they were all once together and that some giant explosion propelled them on their way. This was the first hint of what has become known as the Big Bang Theory of the Origin of the Universe. We have since learned that this expansion is accelerating. Astronomers have proposed that something called Dark Energy is providing the repulsive force for this acceleration. Think about how much energy it takes to accelerate your car, or a dragster, or an airplane. Now think about how much energy it must take to accelerate the Universe, even a little. Dark energy is three quarters of all the energy in the Universe. But no one has any idea what Dark Energy is.

How Did the Universe Get Lumpy?

But the distribution of matter and energy after the Big Bang was unbelievably smooth. There is some microwave radiation left over from the Big Bang, known as the cosmic background radiation.  Astronomers have mapped these microwaves with radio telescopes and with a satellite known as the Cosmic Background Explorer. The cosmic background radiation varies from point to point across the entire Universe with less than 1 part in 100,000, much smoother than the current lumpiness of large scale structures. If the Universe began with so smooth a surface, then where do the lumps of galaxies and sheets and filaments surrounding empty bubbles of space come from?

For the first 300,000 years after the Big Bang not even atoms existed, much less lumps of matter. The fireball of the Big Bang was a plasma of particles such as electrons, protons, and neutrons along with gamma rays whose energies were all so high that atoms were ripped apart as soon as they formed, with the gamma rays in turn being scattered hither and yon by the particles. Gamma rays, microwaves, and ordinary visible light are all electromagnetic radiation, only with different frequencies and energy levels. By the time the Universe was 300,000 years old, its temperature had cooled enough for electrons, protons, and neutrons to condense into atoms. Radiation could now travel freely through space without being scattered by high energy particles (the cosmic background radiation is actually the remnants of this radiation). The Universe became “transparent” to light at this point.

The large scale distributions of lumps and voids in the Universe must have formed at this time or shortly after. There are two theories for the origin of the lumpiness of the Universe. One theory attributes the lumps to gigantic shock waves, encompassing masses of 10 trillion suns or more, traveling through the Universe at that time, compressing matter together much as sound waves compress molecules of air together.  This theory, a “top down” process, predicts that large scale structures of 100 million light years in size formed first, out of which the smaller galaxies later condensed. A second theory, a “bottom-up” approach, says that random smaller clumps of matter first coalesced into proto-galaxies with the mass of approximately 10 million suns. The bottom-up theory predicts that the galaxies formed first, then aggregated into clusters and superclusters under their mutual gravitational attraction. The top-down theory accurately predicts the formation of structures the size of the largest supercluster, but it fails to accurately predict the sizes of galaxies. The bottom-up theory suffers the same problem in reverse – it can account for the sizes of galaxies but not for the sizes of the large-scale superclusters.

Soon after the Hubble Space Telescope began operation, astronomers discovered several proto-galaxies in the process of formation so far away that their light started traveling towards us more than 10 billion years ago, soon after the beginning of the Universe. It is poignant that the oldest galaxies were found using a telescope named for the man who showed that there are other galaxies besides our own. This was strong support for the bottom-up theory that galaxies formed first. However, shortly thereafter another team of astronomers discovered that these and other slightly younger galaxies were already arranged in large clusters, which is what the top-down theory predicts. More recent discoveries appear to support one theory or the other and the currently known structure of the universe seems poised precisely between what these two theories predict. Unfortunately, there are few other available data to decide between these two theories, or how to combine them, or if a third theory is needed. As astronomer Malcolm Longair puts it: “Bandages are being applied to the patient to prevent fatal confrontation with the observations.”

The history of the Universe is the sequence of the formation of lumps of matter, from stars to galaxies to galactic filaments and sheets; the history of astronomy is the discovery of a hierarchy of larger and larger lumps of astounding size. What processes were responsible for this lumpy hierarchy of matter and how it came about remain open questions.

These are beautiful problems to think about while sitting on an ancient Precambrian rock, one of the oldest on our planet, far from city lights, where I could see to the next galaxy. Most of what we now know about the Universe we have learned in the last two or three generations since my grandparents’ time. On the other hand, these older and more rural generations had more personal experience with the stars and the Milky Way than most of us who now live in too-brightly lit cities. According to F. Falchi and colleagues, one third of humanity, sixty percent of Europeans, and a whopping eighty percent of North Americans can no longer see the Milky Way because of light pollution. But, just possibly, if I squinted hard enough on that night years ago in late August, maybe I could see the light from the beginning of the Universe.